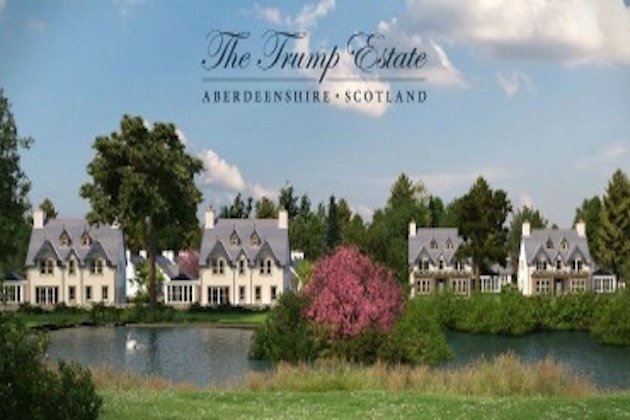 ABERDEEN, Scotland - A record number of people have objected to plans by the Trump Organization to build a large new housing estate near the US president's golf course north of Aberdeen.

More than 3,000 people have submitted formal objections to the plans, with another 19,000 people signing an online petition protesting against the scheme to build 550 private homes and golfers' chalets on farmland beside the course.

Officials in Aberdeenshire council are now sifting through 3,026 letters of objection sent by the 38 Degrees campaign website before the public consultation period ended last week, The Guardian reported.

The council is also considering whether to accept the online petition, which was posted on the 38 Degrees site by local campaign group tripping up Trump, as valid.

Of the 85 public responses accepted by the council before Monday evening, 82 were objections and only two supported the housing scheme.

Many objectors are residents in the nearby village of Balmedie, who had previously backed Donald Trump. They complain the scheme breaches the local development plan, will clog local roads, and ignores demands from government planning inspectors that the US president pays for a new school, community facilities and a sewerage upgrade.

Martin Ford, a local councillor and one of Trump's leading critics in Aberdeenshire, said this was the largest number of objections ever received for a planning application in the county.

It contrasts strongly to the public responses in 2007 when a majority were in favor of Trump's plan for a Pound 750m resort featuring a 450-bed five-star hotel, timeshare flats and shops. It was a stark illustration of how public opinion had turned against him, Ford said.

"In 2007, association with Mr. Trump's celebrity status and the perceived popularity of his resort proposal were seen as powerful political arguments for overturning planning policy and granting planning permission," Ford said.

"Now Mr. Trump has the reputation of an international pariah, and his proposed housing scheme is evidently unpopular - hardly reasons to extend special treatment to his planning application this time."

The US president's current resort, Trump Aberdeen, which he hopes to expand by adding a second golf course, is still losing money. Its latest accounts report losses of Pound 1.2m last year, with its income flat lining, and the company employed nine fewer staff than in 2016.

"It's eye-opening to see how popular this campaign is," said Robin Priestley of 38 Degrees. "It's clear Trump's previous broken promises to protect the beautiful Scottish landscape and boost the economy aren't going to wash this time. The public want the council to hold him to account."

SYDNEY, NSW, Australia - Stocks in Asia charged ahead on Tuesday, adding to gains made on Monday."Investors are trying to ...

SYDNEY, Australia - Tokyo and Sydney shares took off on Monday, and while stocks gained in Shanghai and Hong Kong, ...