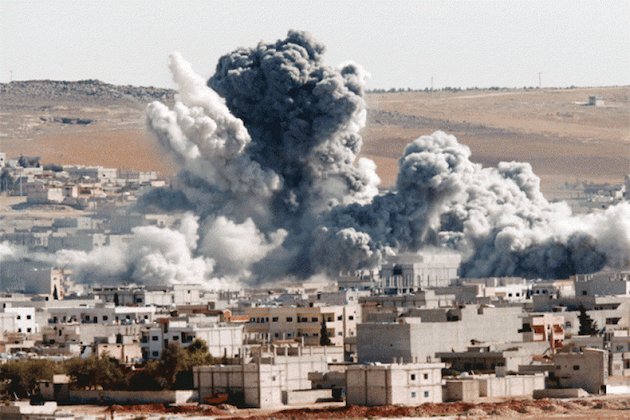 HODEIDAH , Yemen – The major hospital in central Hodeidah in Yemen has fallen victim to a massive offensive underway in the port city which in 24 hours, according to VoA quoting medics on the ground, has killed more than 150 people.

Hundreds of medical workers and patients, including a malnourished woman carrying her daughter in a surgical robe and a man still hooked up to a catheter, fled in terror as a series of large explosions rocked the al-Thawa hospital on Sunday, according to an eyewitness who spoke to Amnesty International.

The pro-Saudi Arabian media outlet Al Arabiya reported Coalition warplanes and attack helicopters targeted Houthi positions on 11 November, including in areas around the university, al-Thawra hospital and 22 May hospital.

A medical worker who was inside al-Thawra hospital at the time told Amnesty International that hundreds of patients and staff dodged a hail of shrapnel as they fled in panic. The sustained bombardment near the hospital lasted more than half an hour.

"In armed conflict, hospitals are supposed to be places of sanctuary. But as the battle for control of Hodeidah intensifies, both sides seem intent on eviscerating the laws of war and disregarding the protected status of even the most vulnerable civilians," Lynn Maalouf, Middle East Research Director at Amnesty International said Monday.

"The situation is increasingly dire, and the UN Security Council must speak out before the battle for Hodeidah sparks a spiralling civilian catastrophe. Yesterday hospital patients and staff were lucky to escape with their lives. If things are allowed to continue like this, it won't be long before the luck runs out and Hodeidah descends into horror," Maalouf said.

Speaking to Amnesty International just hours after the attack, the al-Thawra hospital worker said explosions began at around 11:30am Sunday, but nobody inside the bustling hospital seemed fazed because they initially sounded far off. After months of skirmishes in the outskirts of the city and occasional air strikes by Saudi Arabia and UAE-led coalition aircraft, the worker said many Hodeidah residents have become accustomed to the sound of distant explosions.

But before long the hospital's hundreds of patients and staff realized they were in mortal danger. The blasts came close enough to shake water in water bottles inside the hospital. The explosions were accompanied by the sound of anti-aircraft guns nearby.

"At five minutes to midday, the explosions intensified and were a lot closer. This time I was scared, also because I heard the sound of anti-aircraft guns for the first time. I ran to the reception area... I heard many explosions, and either bullets or shrapnel was hitting the metal roof of the hospital entrance, falling like rain. I could still hear explosions as I got out of the hospital, but I couldn't focus on it. We were all too afraid for our safety," the medical worker told Amnesty International.

He described how panicked people fled into Jamal Street outside the hospital, which is near the fishing harbour and university in the city centre, and fled on foot or in cars and minibuses. Saudi Arabia and UAE-led coalition aircraft were flying overhead and smoke was billowing from the Dentistry Faculty in the university complex, around 500m away. He said it was widely known the faculty had been full of Houthi fighters, both inside the building and gunmen stationed on the roof.

"I saw a patient carrying another patient. It looked like a mother and daughter. The mother was skin and bones, she was malnourished, a typical Yemeni mother… Nonetheless, she was managing to carry her 15 or 16-year-old daughter in her arms. Her daughter was crying. I knew she had either just had surgery or had been in preparation for surgery because she was in a blue surgical robe. There are no words to describe how I felt at this moment," the medical worker said.

"I also saw a man walking as fast as he could while carrying a bag of his own urine. He was still attached to a urinary catheter while making his escape. This scene will stay with me for the rest of my life. There were many children too. Some parents were carrying their children. I saw 10 or 12 children among everyone else trying to flee."

The medical worker said he returned to work at around 1pm. By that time, clashes had calmed down in that area but the hospital was semi-deserted.

An al-Thawra hospital spokesperson told Reuters that intensive care, burn unit and emergency room doctors and nurses stayed in the hospital during the attack. The witness Amnesty International spoke to confirmed this, saying, "A few brave doctors and medical staff chose to stay; I was among the majority that chose to leave."

In the aftermath of the attack, a World Health Organization staffer in Yemen lamented on Twitter how al-Thawra hospital "used to serve about 1,500 people per day but is now almost inaccessible as the ground fighting is raging." Amnesty International said it can confirm that it is the only public hospital in Hodeidah, serving the city and four outlying districts. There are other hospitals in the city but they are private, so besides al-Thawra Hospital there are no viable alternatives for people with limited financial resources to access health care.

As such, al-Thawra hospital is a vital facility for civilians – including many children – in Hodeidah and along Yemen's western coast who are facing acute malnutrition amid the country's dire humanitarian crisis. Last week UNICEF warned that 59 children, 25 of them in intensive care, faced an "imminent risk of death" if fighting encroached on the hospital.

The attack on al-Thawra hospital comes just days after Amnesty International confirmed that Houthi fighters were placing civilians in danger by militarizing the 22 May hospital on Hodeidah's eastern outskirts.

Sources on the ground told the organization that 22 May hospital has since been evacuated. According to media reports, Yemeni government forces then took control of it on 9 November.

It is also not the first time that al-Thawra hospital has been impacted by the conflict. On 2 August this year, an attack hit just outside the hospital, killing and injuring scores of civilians, including first responders who were coming to the aid of civilians hit in a separate strike on the nearby harbour. While it remains uncertain who was responsible for the attack, a Bellingcat open source investigation strongly suggested it was a result of mortars fired from the south by the Saudi Arabian and UAE-led coalition forces.

Hodeidah residents told Amnesty International that Houthi fighters have closed and barricaded two of the three roads outside al-Thawra hospital, declaring them to be "military areas." Satellite imagery reviewed by the organization appears to corroborate this. As residents are forbidden from entering, they are unable to confirm what types of weapons or installations these areas now contain.

"It is feared that the latest attack near al-Thawra hospital may be due to the constant presence of Houthi fighters nearby and their tactic of basing artillery units in civilian areas. Stationing military forces in densely populated civilian areas and carrying out attacks from these locations endangers civilians. All parties are required to do their utmost to avoid locating military objectives amidst civilians. And using civilians to shield fighters from attack is absolutely prohibited and can constitute a war crime," Maalouf said.

"International humanitarian law is very clear that hospitals carrying out their medical functions are never a target, and al-Thawra was very clearly a functioning hospital at the time of the attack. As well as violating the laws of war, deliberately attacking a functioning hospital is a war crime. All the warring parties must immediately halt attacks that endanger civilians, including attacks on or close to medical facilities," the Amnesty official said.

UN envoy Martin Griffiths meantime is working overtime to revive peace talks that fell over in September. "We are in constant consultation with the parties to finalise the logistical arrangements for holding the talks. We are committed to convening the talks as soon as those arrangements are finalised," an aide to Griffiths said on Friday. It is understood negotiations will be held in the next few weeks.