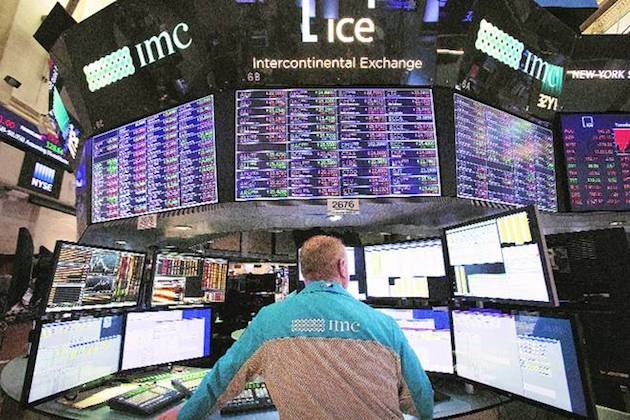 U.S. President Donald Trump was upbeat on trade talks with China, also saying the date for the re-implementation of tariffs of 1 March was not a "magical date," hinting the deadline could be extended.

Whilst that news was greeted well, the president went on to say he would impose tariffs on European automakers if a trade deal with the European Union  wasn't agreed. Opening another front on the trade war did not go down well.

Whilst the Federal Reserve board of governors reaffirmed their pause for interest rate hikes they did not indicate for how long this will be sustained, leaving the door open to a rate increase as early as late 2019.

"I get the sense that rates are on hold until later this year. ... But the Fed stopped well short of closing the door to a rate hike later this year if the downside growth risks subside."Southwest Airlines was a major loser of the day, its stock declining 5.7% after it announced the U.S. government shutdown had cost it $60 million.

On foreign exchange markets the U.S. dollar was little changed. It lost a little ground against the Canadian dollar however which rose to 1.3175 by the New York close on Wednesday.

The Australian and New Zealand dollars were unchanged at 0.7165 and 0.6859 respectively.

HANGZHOU, May 29 (Xinhua) -- AliExpress, a global online retail marketplace and part of Alibaba Group, announced on Thursday that ...

SYDNEY, NSW, Australia - Stocks in Asia skidded on Friday, and the U.S. dollar dived, as the relationship between the ...

PHENOM PENH, Cambodia - Scientists and environmentalists are urging an international moratorium on deep-sea mining after releasing a report indicating ...

NEW YORK, New York - U.S, stocks ran out of steam on Thursday with fears about the worsening U,S.-China relationship ...

TEHRAN (Tasnim) - The Atomic Energy Organization of Iran (AEOI) dismissed as "a futile attempt" the U.S.' new decision to ...

When this writer recently looked into the mirror and took a good look at how long his hair had grown ...

How London's 100 or so billionaires are faring

Over cups of tea in his ramshackle London home I chatted with a novelist. It felt a valuable opportunity, given ...

Are the Golden Days over?

As lockdown measures start to be eased in most countries around the world, the experts of The Conversation's global network ...