Migrants On Belarus Border Pushed Back After Attempt To Enter Poland 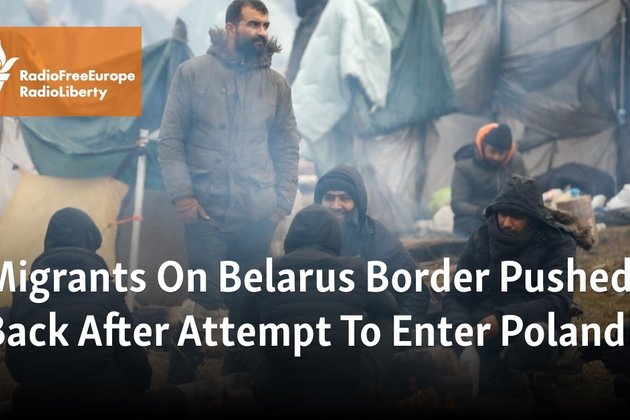 Several groups of migrants attempting to breach the border between Belarus and Poland have been successfully pushed back, Polish border officials said on November 20.

The attempts occurred late on November 19 amid a drop in the number of migrants that have been trying to force their way into Poland from Belarus.

'The foreigners were aggressive. They threw rocks and fireworks and used tear gas,' a police statement said, adding that the largest group consisted of 200 foreigners.

Polish police said that during one crossing attempt near the village of Starzyna, Belarusian servicemen threw stones towards Polish border guards, policemen and soldiers, resulting in police cars being damaged.

The EU accuses Belarus authoritarian ruler Alyaksandr Lukashenka of flying in migrants and funneling them to the borders of member states Poland, Latvia, and Lithuania to retaliate for sanctions the bloc imposed over a sweeping crackdown since last year's disputed presidential election.

Belarus denies fomenting the crisis. Speaking to the BBC on November 19, Lukashenka said it was 'absolutely possible' his forces had helped people cross into the EU but denied inviting thousands of mostly Middle Eastern migrants to Belarus in order to provoke a border crisis.

Polish officials said they recorded a total of 195 attempts to cross the border illegally on November 19, down from 250 on November 18 and 501 the day before, though Warsaw warned that the migrant crisis was far from over.

'We have to prepare for the fact that this problem will continue for months. I have no doubt that that will be the case,' Polish Defense Minister Mariusz Blaszczak told the commercial RMF FM radio station.

'Now a bit of a new method has been taken on by the migrants and Belarusian services... Smaller groups of people are trying to cross the border in many places,' he said.

He added that 'there is no question that these attacks are directed by Belarusian services.'

Polish Prime Minister Mateusz Morawiecki will visit Lithuania, Latvia and Estonia on November 21 to discuss the crisis, a government spokesman said on November 20.

With reporting by Reuters, AFP and dpa

DUBAI, UAE: Israel and Jordan have signed what is being labeled a most significant cooperation agreement to construct a major ...

To improve supplies, Samsung to build chip factory in Texas

SAN JOSE, California: Samsung Electronics will build a $17 billion semiconductor chip factory in Texas, in a bid to increase ...

EV chargers will be required in new UK homes by 2022

LONDON, England: Beginning in 2022, electric vehicle (EV) charging stations will be required in all new homes and businesses in ...

US announces that 95% of federal workers vaccinated

WASHINGTON D.C.: Some 95 percent of U.S. federal workers have received at least one dose of a COVID-19 vaccine, or ...

Of 32 scholarships, 22 awarded to US women as Rhodes scholars for 2022

OXFORD, England: The Rhodes Trust has announced the 2022 class of U.S. Rhodes scholars, which includes the largest number of ...

KABUL, Afghanistan: Under new rules imposed by the Taliban government, women have been banned from appearing on television dramas in ...

DHAKA, Bangladesh - On Tuesday, a Bangladeshi Vijay Dutt (40), known as 'Momin,' was apprehended for running a sex racket ...

VERACRUZ, Mexico: Mexican authorities discovered more than 400 migrants in the back of two semi-trailers on November 19, traveling near ...