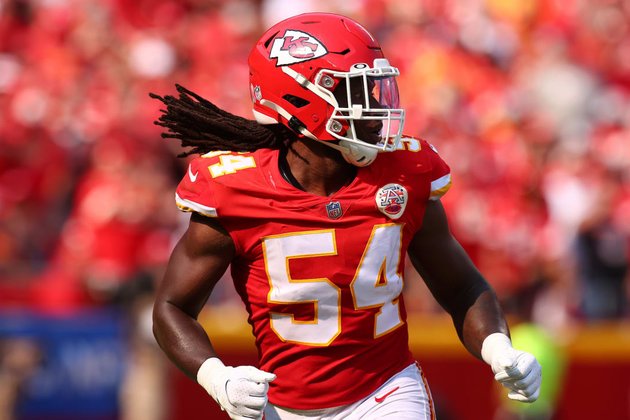 It's no secret that the Kansas City Chiefs came away from the 2021 NFL Draft with one of the top classes in the league, acquiring numerous starters who made an impact right away as rookies. That group of draftees included center Creed Humphrey, guard Trey Smith and linebacker Nick Bolton, each of whom landed in the first round of Pro Football Focus' recent "re-draft" of the 2021 class.

The article, which PFF put together last week, re-imagined how the first round of last year's draft should have taken place with the benefit of how the 2021 season played out now in hand.

Humphrey was the first of that trio to hypothetically hear his name called, landing at No. 14 overall to the New York Jets. The 23-year-old Humphrey was widely considered the top center in the NFL last season, earning the fourth-best PFF grade among all offensive linemen and the best grade for any center since 2017.

Here's what PFF wrote about Humphrey, who the Chiefs landed at No. 63 overall in actuality.

"...Humphrey played at an All-Pro level for the Chiefs in his first season. He allowed 10 pressures in 17 games and had a run-blocking grade of 92.5."

The next member of the Chiefs to go was Smith, who PFF sent to the Arizona Cardinals at No. 16 overall. Smith was undoubtedly the steal of the entire class, as he immediately established himself as one of the best interior linemen in the league despite being the No. 226 overall selection in that year's draft. In fact, Smith was one of only two players included in the re-draft who - in real life - went in the fourth round or later.

The University of Tennessee product didn't allow those humble beginnings to get in his way, earning the opportunity to line up at right guard for 100 percent of the Chiefs' offensive snaps in 2021. PFF ranked him as the 12th best guard in the league last season among players with at least 1,000 snaps, and when compared to other rookie offensive linemen, only Humphrey, Los Angeles Chargers' tackle Rashawn Slater and Detroit Lions' tackle Penei Sewell earned a better overall grade.

The Chiefs weren't done being represented, either. Bolton, the Chiefs' organizational "Rookie of the Year" in 2021, went to the Green Bay Packers at No. 29 overall in PFF's re-draft. Bolton, who the Chiefs selected at No. 58 overall in actuality, became just the ninth rookie since the turn of the millennium to rack up 110+ total tackles and 10+ tackles-for-loss in 2021.

Here's what PFF wrote about Bolton:

"Bolton missed only eight of his 102 tackle attempts including the playoffs and was particularly effective against the run."

The trio of Humphrey, Smith and Bolton made the Chiefs the only team to be represented by three players in this re-draft. The irony, of course, is that Kansas City traded that year's first-round pick (No. 31 overall) to Baltimore as part of a package of selections in exchange for offensive tackle Orlando Brown Jr, meaning that the Chiefs didn't make a single selection in Round 1 on draft night. In hindsight, it appears that the lack of a selection didn't hinder the Chiefs from acquiring three first-round talents anyway.

BEIJING, China - Following a meeting of the two countries foreign ministers, China and Nepal agreed to build the Trans-Himalayan ...