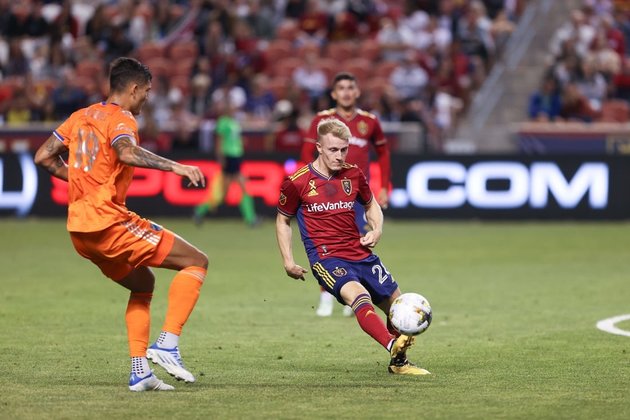 Brenner scored his 13th and 14th goals of the season to continue his recent tear and lift FC Cincinnati to a critical 2-1 victory at Real Salt Lake on Saturday night.

Brenner's third multi-goal performance of the season followed the hat trick he scored a week ago in a 6-0 home win over the San Jose Earthquakes. It helped Cincinnati respond from an early deficit to edge closer to the club's first-ever playoff appearance.

Goalkeeper Roman Celentano saved a late first-half penalty when the score was still tied to move sixth-place Cincy (11-8-12, 45 points) five points clear of the playoff line in the fight for seven Eastern Conference playoff spots with two games to play.

The rookie goalkeeper finished with seven stops as FCC extended its unbeaten run to 10 matches and won back-to-back games for the first time since May.

Maikel Chang scored early for RSL (11-11-10, 43 points), which began the night three points in front of the LA Galaxy for the seventh and final West playoff place.

Salt Lake snapped a 316-minute scoreless streak but remained winless in its last four in search of a second consecutive postseason berth.

Brenner leveled the game in the 44th minute. Alvaro Barrreal sent an early cross from the left all the way across the box and eventually found Alvas Powell on the far side.

Powell looked to his left to find Brenner, who pounded a low shot that had enough power to overcome a deflection from goalkeeper Zac MacMath on its way across the line.

Brenner's winner came in the 76th minute with a similar finish. This time the goal came in transition, with Luciano Acosta trying to thread a throughball to the forward.

It took a deflection on its way, and Brenner adjusted his body superbly to receive the pass. He spun and fired a sneaky quick shot to take his season total to 14 goals, two shy of team leader Brandon Vazquez.

Salt Lake took the lead 10 minutes before halftime. Jasper Loeffelsend found Jefferson Savarino near the byline with a throw-in from the right, and Savarino crossed toward the top of the six-yard box.

Chang beat his defender to meet the cross with a powerful header, leaving Celentano little chance of reacting in time to make a save.

JAKARTA, Indonesia: Due to rising transportation costs after a fuel price hike, Indonesia's inflation rate in September surged to its ...

NEW YORK, New York - The sharp two-day rally, which kicked off the start of October, and this week, came ...

PARIS, France: Carlos Tavares, head of carmaker Stellantis, said this week that the semiconductor supply chain will remain tight until ...

SYDNEY, NSW, Australia - Stocks in Asia continued the global trend on Wednesday with all the major bourses gaining ground.This ...

Musk to provide Florida with Starlink satellites after Hurricane Ian

TALLAHASSEE, Florida: Florida Governor Ron DeSantis said in response to the damage caused by Hurricane Ian in areas of Southwest ...

ODESSA, Kyiv: During an unannounced visit to Odessa, German defense minister Christine Lambrecht said Germany will deliver to Ukraine the ...

HAVANA, Cuba: Three days after Hurricane Ian knocked out electricity throughout Cuba, protests broke out for a second night in ...

FORT MYERS, Florida: Areas within Lee County, including Sanibel Island and Fort Myers, Florida, were devastated by winds, rains and ...

Survey reports 66% of US adults say no to Covid boosters

For All Mankind (4K UHD)